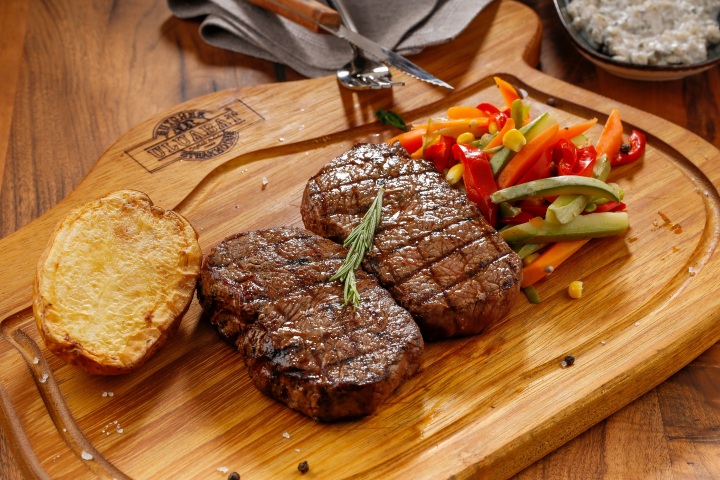 I have been thinking about this article for about a year. I really wanted to write it months ago. But it felt a bit dishonest at that point. First, I needed to prove something to myself. I needed to be sure that I’m not just all talk and babble but can walk the walk. A bit more than one year ago, I decided to go vegan.
We all know the jokes. How do you spot a vegan? Don’t worry, he’s going to tell you. Well, duh.

Since this is my personal playground (which I so rarely use anyway (sad, I know)), I can do whatever the heck I like. And today I decided it’s time to tell my story about how and why I opted for a vegan lifestyle.
I always loved the taste of meat. Chicken, lamb, pork, you name it – I gorged on it. But not only meat was right on top of my list of favourite things to eat. Cheese and eggs were right up there as well. Gosh, I adore the taste of cheese and the wild variety it adds to your meals.

Which is why my decision may appear weird to some. But that’s only the case, if you think it’s a good idea to be a slave of your taste buds for your whole live.
Despite my love for animal products, my diet did not always reflect this desire. The first time, I turned from omnivore to vegetarian was at the innocent age of 15.
After watching a video about the cruelty of factory farming, I simply couldn’t bear the ethical implications of my meat consumption anymore.

I know what you probably think now: “Oh, poor boy, watching a video on the internet changed his life. Cry me a river.”
I’m not even making this quote up. I heard that and similar ones a lot over the years. But life is weird sometimes and I am just as much a slave to its constant changes as anybody else. After eight years, during the middle of my “I don’t give a fuck about anything” period, I decided that I don’t care about the well-being of animals either. Medium-rare steaks? Here I come. I know you have waited a long time to be eaten by me.

For about four years I wallowed full of lust in animal remains and feasted on what once belonged to a sentient creature. Behind me, the Flood. What do I care about the animal, if I’m hungry? Meat is simply DELICIOUS. I don’t care what the consequences are for the environment or my health.

Fortunately, the period in which I just wanted to be edgy at all costs, eventually came to an end.
I grew up, so to speak. Or at least I tried to.
At the tender age of 27, I finally decided it was time to live more consciously again and renounce my exorbitant meat consumption. In the meantime, a whole range of excellent substitute products filled the supermarket shelves, making it all the easier for me to give up dead animals. I had also long since replaced cow’s milk with coconut milk, which simply tastes, hands down, a lot better.

There was still cheese.
Gosh. I love cheese. So many times, I walked into the kitchen in the middle of night just to snack a few bites. And then some more. What can I do? I’m a slave to my passions. Sue me.

A vegan in the making

However, I had reached a point in my life that forced me to reconsider my choices more and more. The memories of my past, highly toxic relationship were still fresh, while I plunged into new literature and videos to find answers to questions I didn’t even know existed until then. Or didn’t want to know.

Also, as an act of distancing myself from my former partner, I began to delve deeper and deeper into what can commonly be subsumed as “climate science.” While she turned out to be ever more of a conspiracy theorist nutjob, convinced that climate change wasn’t much of a problem, I became increasingly aware of HOW problematic it actually was. Perhaps this was due in part to the fact that I actually read the relevant studies.

I combined this intense focus on climate science with my new found interest in complex systems and statistics to become more and more aware of the interrelationships therein. Corresponding articles can, of course, be found here on the blog.

And at some point, the cognitive dissonance kicks in with full force. It is evident that factory farming contributes to a large extent to the acceleration of climate change. Our current way of producing meat or animal products for human consumption is having a huge impact on the environment.

No one knows exactly when the so-called point of no return will be reached, at which point the earth’s climate will change dramatically to our disadvantage. This makes it all the more important to mitigate as much damage as possible right now.

The more I read and wrote, the more painfully I realized that I had to change something in my personal life as well. I couldn’t read a study on the negative impacts of livestock farming with one hand and be concerned by it while eating a cheese sandwich with the other. That seemed logically inconsistent to me.
Since logic plays a very important role in my life, the only acceptable consequence for me was to go vegan.
Reality forces necessity.

The future is vegan

The straw that broke the camel’s back was a statement made by Alex J. O’Connor during a talk on veganism:

Bam. There it was. Plain and simple. If I thought X was bad, I cannot do Y which ultimately leads to X otherwise I would be nothing but a hypocrite.
Of course, it is almost impossible to lead an ethically perfect life. However, that is not a requirement at all. The goal should always be to strive for an ideal, even if one probably never reaches it. To make the world a little bit better with every action.

Will my decision to go vegan save the planet? Probably not alone. But fortunately, I know I am not alone. More and more people are rethinking their lifestyles and choosing to try alternatives. Some traditional companies that made their main revenue from selling meat for decades are now making better profits on substitute products. Who would have thought.

In the very near future, lab-grown meat will become a commodity. The same, if not better taste, without ever causing an animal to suffer. I am confident that our eating habits will change more and more and even the most enthusiastic meat lovers will realize that an animal does not necessarily have to give its life for their enjoyment.

I did not regret the decision to live vegan for one second. The first two months were a bit unusual, as I had to pay more attention to what products I was buying. Being someone like me who is incredibly lazy and usually can’t stand to cook, things changed. Now I cook very regularly, eat much more balanced than before and, as a nice side effect, am fitter than ever. Of course, this is also due to the fact that I exercise much more regularly and intensively, but my vegan diet has not detracted from this – rather the opposite.
This remark should also serve as an incentive for all those who are convinced that they absolutely have to consume animal proteins in order to see athletic success. This is a persistent myth and my own experiences are among countless examples of other vegans.

I don’t intend to lose sight of reality. It’s unlikely that tomorrow I’ll wake up in a vegan utopia and climate change will no longer be a problem. But as I wrote earlier, every small improvement is a step in the right direction. Those who, like me, love to eat meat, will find it difficult to completely give it up. But even a cutback is a good start. Trying out alternatives and expanding your own culinary horizons. Chances are good that you will find new dishes that do without the carcasses of non-human creatures.
Anyone who cares deeply about environmental protection and animal welfare will eventually face the same decision I once did:
Veganism is the only logical, ethically justifiable solution.