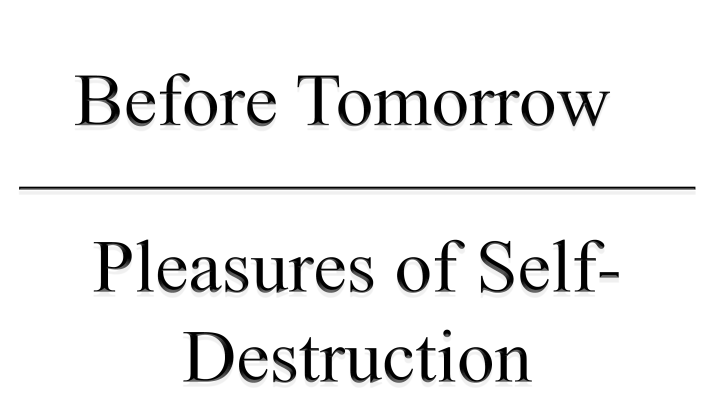 Today was…extreme. In many ways. The fact that I write these words in the middle of the night before going to bed and not, as usual, in the morning after waking up, already speaks for itself. I actually wanted to go to the ASP concert and meet Alicia. Instead I struggled half a day with panic attacks and spontaneous howls. I tried to get rid of my ticket so that at least somebody would get some joy out of it and so I drove halfway through town to give it to somebody who wanted to try to get rid of it on-site. People were everywhere. So many people. I could literally feel my pulse accelerating with every second I spent among them. I just wanted to scream, wished they would suddenly disappear. I had to think of Dr. Manhattan in Watchmen. There’s this one scene where he’s pestered by a crowd in front of a running studio camera and confronted with a situation he can’t control. A quiet “leave me alone” is followed by a louder one, then another, until he finally uses his powers to teleport all the people away from the TV studio. Unfortunately, I am not Dr. Manhattan. Although that’s probably better. Otherwise, many of the places where I find myself would very quickly be very empty. As long as I was outside, I could still keep myself under control, but as soon as I had returned to the safety of my own walls, these powers left me. Again and again I had to pause because emotional pain took my breath away and I lost the fight against tears every time anew. The desire for a few milligrams of Tavor and a knife had rarely been so strong. I haven’t felt this extreme despair for years. For so long I thought the worst was over. I had hoped that I would never have to go through these extremes again. But now I’m not so sure anymore. The desire for nightly excess returns. Drugs, sex, alcohol, no matter what, as long as it simply destroys me. Anything is fine by me as long as it numbs my feelings. I miss those days. When nothing mattered. It was only the rush, only the excess, only the countless nights in a state of altered consciousness. Sure, now I live safer, healthier, better, fitter and all the other beautiful, shiny depictions. But with every day that passes I feel more fucked up than ever. What do I care about alcohol poisoning if I feel at least for a moment a bit less? My best friends have been trying for weeks to persuade me to go back to therapy. Fuck, I admitted it to myself a few days ago. And now what? Now I want rush and a knife. Life at the crossroads. I have to decide how I want to spend the next few years. Either in excess and die before I turn thirty or listen to the advice of wiser people and seek professional help. My mind knows exactly what to do. My completely crazy emotions are not so sure. They love the rush. They remember the intensity of those nights back then. How reckless I was then. Nothing was important, just the moment. Night after night spent in crowded clubs and bars, sweating, drinking people around me and for a short time, the pain disappeared. But when it came back, it was all the more violent. It was also the time when I was repeatedly driven to the clinic by ambulance because my mind could no longer bear the strain. Or I myself drove to the psychiatric emergency room with my roommate in the middle of the night to get some Tavor which at least calmed me down a bit. The excess and its drawbacks. There’s always a morning or night after, but it’s usually much worse than anything that happened before. So I’m lying here in the middle of the night wondering what to do with myself. Therapy seems to be the best of all options. Would at least increase my chances of survival several times over. But will I be able to wait at all for months? Do I have the strength to wait so long for help? Maybe a clinic would be better. At least for a while. Until I have regained some stability. Oh, I don’t know either. My thoughts are confused. I would love to cry again. But I probably won’t find an answer through that either.